Friends – I am thrilled to share this shahi tukray recipe on the blog. I’m not going to lie. I frequently struggle with posting desserts so it’s always a major milestone when a new dessert recipe goes up!

Shahi tukray is a very popular Pakistani dessert that is frequently featured in Pakistani cookbooks and blogs. To be honest, I never really grew up eating it and so don’t really have a point of reference. In the development of this recipe, I went back and forth on traditional variations but then, came across a lovely take in Saliha Mahmood’s gorgeous book, "Khazana". The version I share here is an adaptation of her recipe. In my opinion, it’s kind of like a baked French toast meets traditional shahi tukray.

The story of how shahi tukray came about in the sub-continent is an interesting one.  Bisma Tirmizi does a deep dive its history in this interesting piece for DAWN. There is some debate about whether the dessert came with Babur during the 16th century or emerged during the days of the British East India Company from a traditional English bread pudding. Some argue that it may have its roots in a Middle Eastern bread pudding, either Um Ali from Egypt or Eish es Serny, all of which likely emerged from a desire to use up leftover bread.

Rumor has it that shahi tukray was a popular dish among Mughals during Ramadan. Maybe this is the reason why it’s widely served during Iftar. In fact, I was supposed to post this recipe during Ramadan but alas, here I am two months later. Sorry :/

For next year though…

How to Make Shahi Tukray Your Own

Like with all Pakistani dishes, there will always be somebody who will tell you there is only “one way” to do it. I’m sorry but they are wrong. I pored through several recipes of shahi tukray and was surprised (but not really) to find A LOT of variation between recipes. The fundamental principle however is this: shahi tukray is fried bread that is submerged in sweetened, spiced, thickened milk.

Here are some ideas on how you can adapt any shahi tukray recipe (including this one) to your preference:

Hope these tips will give you inspiration to play around with this classic South Asian dessert, and that you have as much fun cooking and eating it as much as I did. Enjoy x 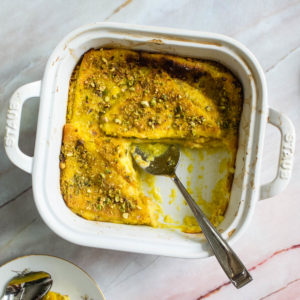