This Parsi custard, Lagan Nu is a sophisticated sub-continent dessert that brings together the best of English and South Asian flavors.

Hi friends – it’s been a minute! I have been hard at work testing this Parsi custard: lagan nu. The recipe has been adapted from Sumayya Usmani’s book, “Mountain Berries and Desert Spice”, which features Pakistani sweets from across the country. Sumayya says that while custards are not a typical Pakistani dessert, this Parsi take is frequently served at weddings.

The Parsi Community in the Sub-Continent

Parsis are Zoroastrians that migrated to the sub-continent from Persia during the Muslim conquest of the region between CE 636 – 651. In Pakistan, they are predominantly concentrated in Karachi. They are a comparatively small community but given their intellectual and cultural prowess, their contributions to sub-continent culture have been immense. Pakistan’s leading intellectuals have been Parsi, including one of the first English novelists: Bapsi Sidhwa! Incidentally, one of my favorite sub-continent food writers, Meher Mirza is also Parsi. She has written extensively and elegantly about Parsi culinary traditions. You can follow her on Twitter and read some of her work here.

When I did a little taste testing of this custard with my friends in Phnom Penh, I was struggling to explain Parsi culinary tradition. Fortunately, many people have written about it much more articulately than I could even attempt. Meher’s work is a great start. I also enjoyed this informative, beautifully written piece by Ligaya Mishan, A Bid to Maintain One of the World’s Oldest Traditions.

Can South Asia Claim Custard as Its Own?

While personally I have never been to a Parsi gathering where I have tried lagan nu, I do think custard is a very South Asian dessert. My friend, Sharanya in this recent fabulous, intricate piece in fact asserts how fruit custard maybe one of India’s most popular desserts.

The custard I grew up eating was always made out of a box (Rafhan is the Pakistani brand of choice) and served with fruit. Once layered with plain cake and jelly, you would get trifle – another classic Pakistani dessert. In her piece, Sharanya talks about how the runny sub-continent custard bears little resemblance to the traditional British custard that the colonizers brought with them. In fact, she adds, Parsi custard is probably the closest to traditional English custard, adapted from either crème caramel or caramel custard.

Some Tips on Making Custard

It just goes to show (like I say in every other blog post...), there is no one way. There are dozens of variations. For this recipe, I used Sumayya’s recipe in the book as a base, and incorporated pieces from this easy egg custard recipe on Epicurious. To get the consistency I wanted, I adjusted the milk to egg ratio, and dialed down the sweetness to my liking. Since this was my first attempt at custard, I am by no means an expert. But here’s a few tips that might help you: 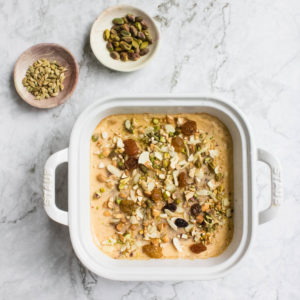