Khagina can be roughly defined as South Asian style eggs. This is a simple Punjabi variation, which incorporates a lightly spiced tomato-onion base, potatoes and fresh cilantro. It’s a bright, filling breakfast that is now part of my weekly rotation.

I first tried khagina thanks to Shayma Saadat’s recipe several years ago. While scrambled maybe my least favorite way to have eggs, the sentiment definitely doesn’t apply to khagina. This is in part due to the color and flavor brought by fresh tomatoes and cilantro.

In India, the more widely used term is bhurji or akoori but you can still find recipes that go by khagina. The term maybe more widely used in Muslim households in India. There is significant variation in the recipes with the Bengal version incorporating a smoked, mashed eggplant; or this Hyderabadi take with a beautiful tadka courtesy of chef Ranveer that resembles a shakshouka.

I never grew up having khagina at home (my family’s choice of eggs was either a masala omelet or fried egg with paratha.) But my mother did. This is her recipe, which incorporates potatoes. In Pakistan, this dish is mostly called aloo anday (potatoes with eggs) but it would still fall within the larger category of khagina.

In my quick research, I found there is significant variation in ingredients, so what makes khagina ‘khagina’? In addition to eggs (obviously) here’s a quick note on commonly found ingredients:

Like all scrambled eggs, khagina comes together fairly quickly so here are some basic best practices to make sure it comes out well: 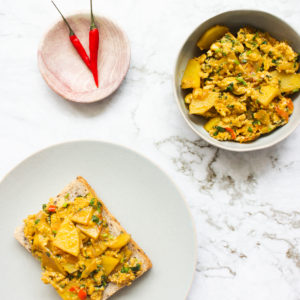