These Gujarati aloo are a quick and flavorful side. They derive their punchy flavor from a rich tempering of kadi patta, cumin and mustard seeds.

I first had these spiced potatoes in D.C., thanks to my father's cousin Mariam who would often bring them over to our place as a side.

While there was never a potato dish I didn't like, these Gujarati aloo are special. They work well served at room temperature, and draw upon a spice profile different from the one I grew up with. This aloo sabzi version is one that I was more familiar with.

So I reached out to Mariam to share her Gujarati aloo recipe as part of my drive to capture a more complete picture of what Pakistani cuisine looks like. I was thrilled when I finally learned how to make this delicious, mysterious potato dish.

Thanks to her Karachi upbringing, Mariam was exposed to a much more diverse culinary palette as a child than I was. She learned to make these spiced potatoes (and this masoor moong daal) not from her mother but from her Gujarati friends.

Rumor has it that this dish originally became popular with the Gujarati trader community because it stores and travels easily. I like it because it's delicious, easy and takes than less than 10 minutes of active cooking time. 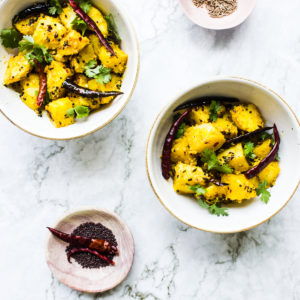