In my bid to fill gaping holes in the blog (see bhindi masala post), I bring you a masala chai recipe. My husband, Saptarshi, has been after me for years to post a basic chai recipe given its central place in a Pakistani household. At home in Islamabad, we only have simple Lipton black tea that is brewed in a teapot for a few minutes and served alongside milk and sugar. It wasn’t interesting enough to warrant a post. But when I tried this Lahore Deli Chai recipe a couple of years ago, I learned of the special joy of a spiced, creamy chai. When I recreated it a couple of weeks ago, I realized that it was a little too spicy and too milky for my taste. There had to be a middle ground.

This masala chai recipe is that middle ground. A typical roadside Pakistani chai is doodh pati – tea leaves cooked in milk. That’s Lahore Deli’s variation as well. But since I cannot stand too much milk in my coffee or tea, I adapted the recipe to make it less milk heavy. I took some lessons from my friend Izzah’s authentic chai recipe on her blog; and Numra of Empress Market from her tutorial on Instagram.

This masala chai recipe is for me. If you are looking for a doodh pati recipe or a really complex masala chai, you will have to look elsewhere. This is tea primarily brewed in water (rather than milk) and lightly spiced with a pinch of ground fennel seeds and cardamom. I played around with the recipe a few times and here’s what I learned.

How to Make This Chai Recipe Your Own

I hope these tips and recipe will guide you to make your own perfect cup of masala chai. Till then, enjoy and Ramadan Mubarak! 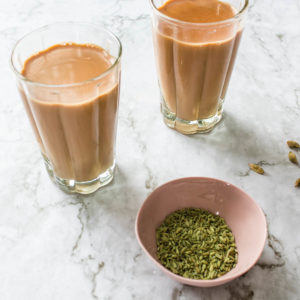 A simple recipe for a masala chai that's somewhere between dhaba tea and the one I grew up having at home.
5 from 2 votes
Print Recipe Pin Recipe
Cook Time 15 mins
Total Time 15 mins
Course Drinks
Cuisine Pakistani Cuisine
Servings 4 people