Readers, I am thrilled to share my first published recipe of shami kebab for TASTE where I will be the first Cook in Residence!

TASTE is a fantastic online food magazine launched by Penguin Random House to highlight America’s rapidly evolving food culture. Under their brand new In Residence program, residents will be given the resources, and time to create art in their chosen medium.  I am incredibly honored to be standing alongside Maya Erikson, Baker In Residence, pastry chef at Langbaan; and working with TASTE’s outstanding editorial staff to produce a series of stories spotlighting Pakistani food and culture.

My first story and recipe is on my favorite variety of kebabs – shami kebab. While in Pakistan, I would take them for granted, after moving overseas, I realized that no other kebab served at restaurants compares.

The term, ‘kebab’ is a bit of a misnomer. Shami kebab is a delicate fried patty that’s made with boneless beef chuck and chana daal minced together, and infused with a punchy spice blend.

While they are often served as a side during dinner, my mother would also fry them as a snack, either by itself or in the form of a sandwich. They definitely takes some time to prepare but a shami kebab is always worth the effort.

Read the full story about my favorite teatime snack here, and find the recipe below. 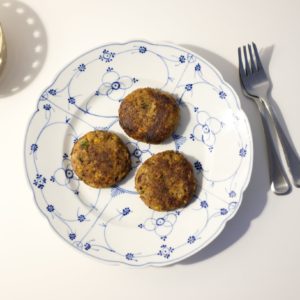 To freeze: Carefully place the raw patties inside Tupperware, and store in the freezer for up to one month. My mother recommends placing them on a tray and freezing them first, and then transferring them to Tupperware or a Ziploc bag.
Tweet
Share
Pin5
Share32
37 Shares
Previous Post: « Mommy’s Mutton Pulao
Next Post: Fruit Chaat (Fruit salad) »