Hi! I'm very happy to republish this recipe for Ash Reshteh, a rich noodle soup, in celebration of Nowruz. Back in 2018, when I was reporting on Afghan cuisine in Islamabad, I interviewed Ehsan, an Afghan student who talked about how much he missed ash. He referred to it as “Afghan spaghetti.” I had never heard about it before, and so was excited when my friend Nur offered to prepare it for me. Even though Ehsan referred to the dish as ‘spaghetti’, it is a thick soup that features special flat wheat noodles. While the recipe below is an Afghan adaptation, ash is part Iranian, Azerbaijani, Caucasian and Turkish. In Iran, people commonly refer to it as Ash Reshteh, and prepare it on the eve of Nowruz, the Persian new year.

Some Notes on the Ingredients

The recipes for ash vary in sequencing to ingredients to tempering. Broadly, it appears that ash nearly always comprises wheat noodles, beans, some greens, and is served alongside yogurt or whey.

Ash is hefty enough to be served on its own but Nur served it as part of a larger spread that included borani banjan. But it's definitely a group that is meant to be shared with large groups. The great thing is that the soup can be prepared at least 1-2 days in advance of a big gathering. 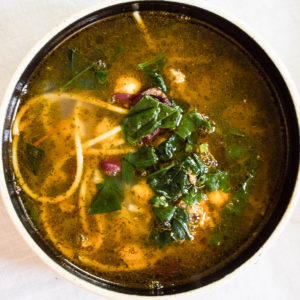